My area
Back
Homepage
>
About Greater flamingos 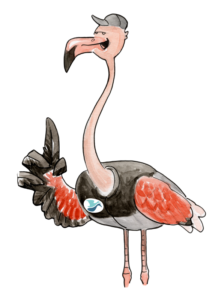 The Greater Flamingo is undoubtedly one of the most important figures in the Camargue landscape, along with the bull and the Camargue horse.

How did it become such a star? 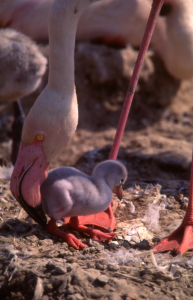 It seems that its popularity comes as much from its beautiful plumage as from its atypical appearance. Indeed, Geater Flamingos (Phoenicopterus roseus) have a unique anatomy and habits. These large birds can live very long, depending on individual (gender, age) and environmental factors. For example, in the Camargue, the Flamingo ADH, ringed in 1977 on the Fangassier Lagoon in the Camargue, was observed on May 28, 2020 at the Salins d’Aigues-Mortes, which makes it, at 43 years old, one of the oldest known wild flamingo. It is not the only one, three other individuals of the same age were also observed this summer (AVY, BUD and BXX). But this exceptional bird hasn’t said its last word yet, since the longevity record in captivity is 83.

The shape and size of its beak, as well as the way the bird feeds itself, are very special. To catch its meal, which consists largely of very small prey (invertebrates), the Pink Flamingo uses its beak, which features lamellae that cover the edges. Like whales, they use these appendices to filter water and trap invertebrates to feed themselves. But the Greater Flamingo has more than one trick up its sleeve. It is also one of the only species that lives and feeds in very salty areas where other species do not venture. This feat is possible because of a gland that enables it to evacuate salt through its nostrils.

The colour pink is extremely rare in the animal world. To create it, Greater Flamingos transform carotene pigments in their food (crustaceans, algae, and invertebrates) into a beautiful pink hue. This colour, which makes this species famous, varies with the bird’s plumage. Indeed, the chicks are born grey. After a year, they progressively get a plumage with shades of grey, white, and pink. It is only at the age of 4 to 7 that flamingos acquire their adult finery where pink is dominant. 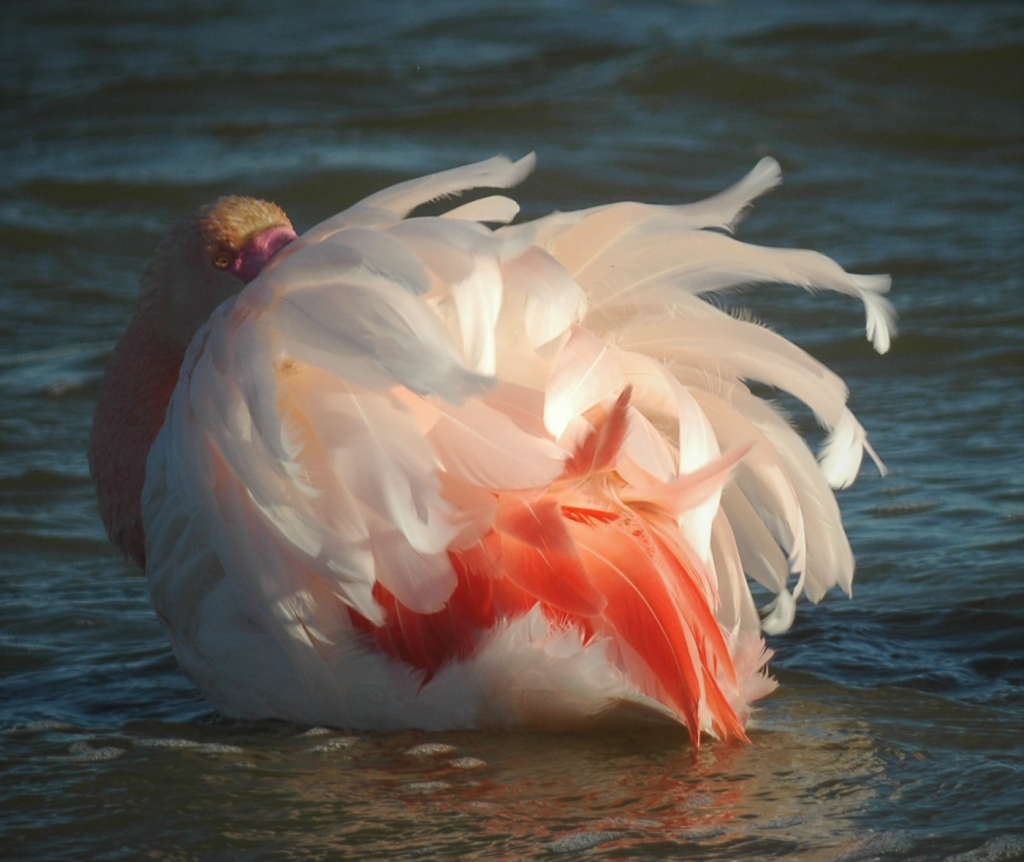 Never without its mates

You will rarely see a flamingo alone. This bird behaves gregariously and gathers with many other fellow flamingos. Greater Flamingos breed in colonies of several hundred to several thousand birds. An islet surrounded by water (salty or brackish) is an essential condition for Greater Flamingos to reproduce and nest without worrying about predators. In fact, the Greater Flamingo is one of the rare species that raises its chicks in a creche. 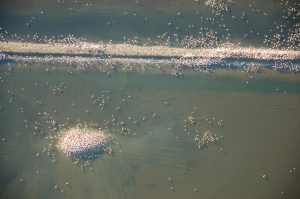 Find out more about the origins of the Greater Flamingo research and ringing programme at the Tour du Valat: Flamingos Success story.

Today, Greater Flamingo monitoring is conducted throughout the entire Mediterranean region. Studying their dispersal helps us to understand the exchanges taking place in the overall Greater Flamingo population. This experience is emblematic of the Tour du Valat’s action, which attempts to contribute the results of its scientific research to nature conservation. It is in part thanks to conservation measures on the ground that this bird has become today an emblematic species of the Camargue. 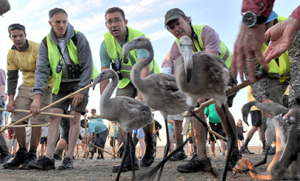 However, this achievement would probably not have been possible had this conservation programme not been accompanied by high-level and rigorous scientific research. Dependent on shallow brackish and salt water lagoons, Greater Flamingos are vulnerable. Most wetlands on which they depend are under threat due to transformations, drainage, pollution, water sports, and other causes. As a result, the Greater Flamingo’s survival in the Mediterranean area depends on the effective conservation measures carried out at the sites of other breeding colonies and at migratory stopover sites.

This website uses cookies to improve your experience while you navigate through the website. Out of these cookies, the cookies that are categorized as necessary are stored on your browser as they are essential for the working of basic functionalities of the website. We also use third-party cookies that help us analyze and understand how you use this website. These cookies will be stored in your browser only with your consent. You also have the option to opt-out of these cookies. But opting out of some of these cookies may have an effect on your browsing experience.
Indispensables Always Enabled
Les cookies nécessaires sont indispensables au bon fonctionnement du site. Ils ne stockent aucune information personnelle.
Non indispensables
Tous les cookies non indispensable pour que le site fonctionne. Ils collectent des données sur les visites du site pour vous offrir la meilleure expérience possible. Ces cookies sont soumis à votre consentement.
SAVE & ACCEPT
Continue your visit to the website Finalise your donation