My area
Back
Homepage
>
Success story

Pink Flamingos and the Tour du Valat, a love story!

Pink Flamingos often settle in deltas, where inland waters and the sea meet to create natural islets…islets that Pink Flamingos are particularly fond of because they are surrounded by water that protects them from land predators such as foxes and wild boars. And to feel even stronger, they like to nest in colonies by the thousands! That’s how, starting in May, these islets become very pink. (aerial picture of islet) 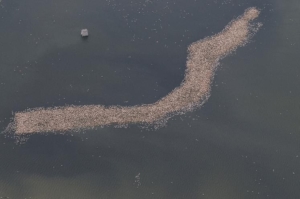 Just after Luc Hoffmann – founder of the Tour du Valat – arrived in the Camargue, he wanted to study Pink Flamingos, so he quickly set up ringing sessions in order to better understand these birds. Shortly after, Alan Johnson – a young English ornithologist just as passionate as Mr Hoffmann – joined the small Tour du Valat team. All the observations and data collected enabled these two men to better understand why, at the end of the sixties, flamingos stopped nesting in the Camargue. Because of the embankments built along the two branches of the Rhone river and the sea, natural islets no longer formed, and Pink Flamingos no longer had suitable conditions for “making their nests.” 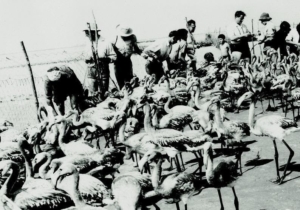 Encouraging the nesting of Pink Flamingos in the Camargue

Luc Hoffmann and Alan Johnson then proposed to the Midi salt-making company, to the Camargue Regional Natural Park, and to WWF, to create an artificial islet in the middle of the salt-works, on the Fangassier Lagoon. To encourage the return of Pink Flamingos, we even built nests on this islet… And it worked! 3 years later, Pink Flamingos and their chicks occupied this new islet!

Every year since 1977, the Tour du Valat fits around 800 flamingo chicks with coloured rings with an alpha-numeric code that enables each animal to be identified and tracked. These observations now constitute a database that is unique in the world (300,000 data points), making it possible to better understand this species’ biology. This programme has gradually expanded and now includes many scientific partners and site managers in France, Spain, Italy, Mauritania, Turkey, Iran, and other countries.

Any cookies that may not be particularly necessary for the website to function and is used specifically to collect user personal data via analytics, ads, other embedded contents are termed as non-necessary cookies. It is mandatory to procure user consent prior to running these cookies on your website.

Continue your visit to the website Finalise your donation